‘Bread and circuses’: The first sneak peek at the new Allianz Stadium

Sydney Roosters coach Trent Robinson believes that sport now has, in the form of the new Allianz Stadium, a worthy colosseum in the east.

“You talk about the old Roman thing of bread and circuses, they are important to the people,” Robinson said.

“That goes back to ancient times, why people come out to watch entertainment; it’s because they want to see people doing extraordinary things.”

The media on Tuesday got its first glimpse of Allianz, which will host a free community open day and night on August 28, headlined by Australian music acts Guy Sebastian and Baker Boy. However, it will predominantly host sporting events and the Roosters will be an anchor tenant. They will get first use of the stadium in a blockbuster final-round clash against arch rivals South Sydney on September 2.

“I love the fact that, for the Roosters, it’s always a balance between that tip of the cap to history and the continual progression forward. That’s what that area and stadium does for us.

“It’s our job to play some good footy.”

SCG Trust chairman Tony Shepherd described Allianz, which has a capacity of 42,500 spectators, as a “grander version” of Parramatta’s CommBank Stadium.

“I’ve been around the world – at my expense, I might add – looking at the best stadiums all over the world. This is right up there,” Shepherd said.

“Wembley and Tottenham Hotspur Stadiums are the ones to benchmark against. They are bigger stadiums but designed with the consumer in mind. It’s about making the customer experience as good as you can in terms of food and beverage, access, seat comfort, view lines, all of those sorts of things.” 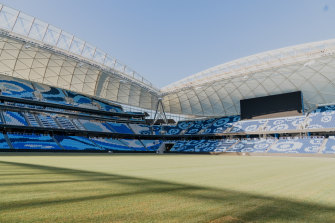 Allianz Stadium is just about ready to host live entertainment.

The old Sydney Football Stadium provided rain cover to only 30 per cent of patrons, with that figure now at 100 per cent. There’s an exclusive area inside that allows patrons to watch the teams warm up – coaches can choose to frost the glass if they want privacy – before they run out.

Renowned Indigenous artist Tony Albert designed the artwork illustrated across the outside seats, which are set on the same gradient as those at CommBank.

“The concept is ‘Two worlds colliding’,” Albert said. “Whether through friendly or very fierce competition, it’s about this engagement of two separate groups. Culturally I’ve decided to do that through the land and the sea; one end of the design is the ocean through the bubbles and the other is landmarking through this cross-hatched design.

“It was an opportunity to tell the story and for the people to engage with the artwork literally, they are literally sitting on it.”

“I’ve been … looking at the best stadiums all over the world. This is right up there.”

The stadium was delivered on time, despite the obstacles presented by the torrential rain that battered the worksite.

“We were three days away from laying the turf before the flood hit, which was one of the biggest issues we had,” said Evergreen Turf project supervisor Chris Chapman.

The Roosters-Rabbitohs match is the first of three big sporting events in five days; the Wallabies will host reigning Rugby World Cup champions South Africa on September 3, before the Matildas take on reigning Olympic champions Canada on September 6 in an international friendly. 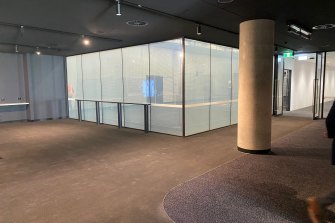 Robinson believes the new stadium will provide the best possible experience for fans.

“We want them to come,” Robinson said.

“They love rugby league or whichever sport they enjoy in that stadium, but they get to experience it in a modern way.

“That was the reason the stadium was redone; it wasn’t as much about the teams that are going to inhabit the ground, it’s about the people who are going to come and watch.”