To become the best, Nicho Hynes figures you need to learn from the best. Which is why the Cronulla halfback gravitated towards Nathan Cleary in Blues camp.

“Me and Nathan started to get along well towards the back end [of the camp in Perth],” Hynes said. “I like to learn a bit off him because he obviously plays the same position and is the best player in that position.”

Hynes has been one of the buys of the year, taking his game to the next level since shifting from Melbourne to Cronulla. The 26-year-old has already proven during his time in the Shire that he is a genuine halfback, but felt he could further elevate his game by benchmarking it against the NRL’s premier No.7.

“He just wants to be the best and took that first loss pretty hard on himself. You look at his performance [in game two] and he absolutely killed it – one of the best performances you will ever see. 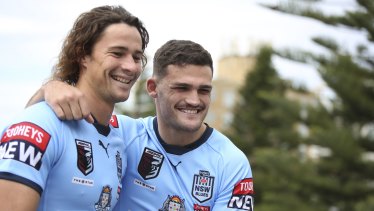 “Those little things, watching him do his extras, is good to watch: goalkicking, kicking, he’s just the ultimate professional. You can see why he’s one of the best players of the game.”

For the past three State of Origin games, Hynes has been NSW’s 18th man. Being agonisingly close to a Blues berth has only provided the Indigenous All Stars representative with further motivation to break into the interstate arena.

“It’s really good to be a part of [camp],” said Hynes, who lent his support to the Beanies for Brain Cancer launch during the week.

“You surround yourself with great players and learn a hell of a lot. I’m so grateful to be a part of the squad for the past two camps. I’ve learnt heaps and will take that back to the Sharks.

“I learnt heaps about being professional and how they go about their day-to-day business. Watching the likes of Teddy [James Tedesco] and Nathan Cleary, especially being in my position; I pick up little traits of what they do. I definitely take it away, learn from that and try to implement those things into my game.” 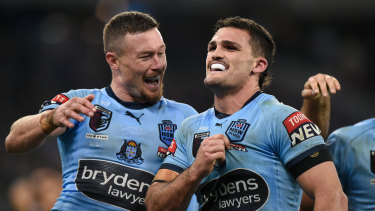 Nathan Cleary celebrates a second-half try as NSW streak away in Origin II.Credit:Getty

One of the areas Hynes is keen to improve is his goalkicking. After recording a 75 per cent success rate at the Storm last year, Hynes’ percentage for Cronulla is down to 63 per cent.

“I didn’t do it in camp, but I need to get a few tips off Nathan,” he conceded. “That needs to pick up a little bit.”

The Sharks have an opportunity to consolidate their spot in the top four when they take on Canterbury at Commbank Stadium on Saturday. Three of their players – Wade Graham, Dale Finucane and Cameron McInnes – tested positive for COVID during the bye weekend, but all are available for the clash with the Bulldogs.

“Fortunately it didn’t knock them around too hard and we managed to get a few training days into them as well,” Sharks coach Craig Fitzgibbon said.

“The three players who had it hadn’t had it previously. It came at a fortunate time for us being rep round, and they weren’t involved in rep footy; they got a rest and still got to train.”

Bulldogs coach Mick Potter wasn’t as fortunate and will be required to isolate as his side attempts to record three consecutive wins. Having been twice sidelined himself with COVID this season, Fitzgibbon can empathise.

“It has its challenges,” he said. “I had to trust the staff and I knew the players were in good hands, so there were no concerns there.

“As a coach you prepare all week and then come game day you’re quite powerless to be honest. You set up how you want to play but once they take the field you realise there’s not a great deal you can do at that point. When you’re not there, that’s even less so.

“It’s uncomfortable for sure. I’m sure Mick is the same; that he trusts his staff and they will prepare. You don’t change how you play every week anyway. It’s about improving on your style and the way you want to play. They will know what they are doing.”

Watch the State of Origin decider exclusively live and free on Channel 9 and 9Now.

Stream the NRL premiership 2022 live and free on 9Now.