ARL Commission to give final green light to captain’s challenge

The ARL Commission is expected to give the final green light to the captain's challenge on Monday.

Both the All Stars match on the Gold Coast and Saturday night's Charity Shield clash in Mudgee were used as crash test dummies for the new rule, which allows each team's captain one unsuccessful challenge of a referee's decision in any play that requires a structured restart. 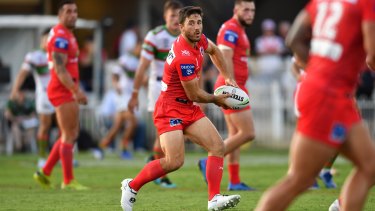 Dragons’ stand-in skipper Ben Hunt made positive use of the new captain’s call during the Charity Shield. Credit:NRL Photos

While there were some teething issues with the new rule, including when the Maori All Stars met the Indigenous All Stars at Cbus Super Stadium, there were no such issues during the Charity Shield.

Stand-in Dragons captain Ben Hunt was the man behind both successful challenges with new skipper Cam McInnes sidelined and coach Paul McGregor flagged the possibility of calling for challenges from the coach's box by waving a red or green paddle.

"We didn't have it tonight but we're looking at different ways of being innovative and bringing in a quick decision," McGregor said after his team dropped the Charity Shield clash 28-12. "If we can get it from top-down or the sideline or the players see something and want to ask to back up that support, we'll come up with little ways of making it clearer for the boys out there."

Hunt made his challenges either side of half time. The first came after officials missed a Latrell Mitchell knock-on, the second when the temporary skipper was judged to have knocked the ball on.

"There were a couple of others there that probably could've challenged as well but I think for something so fresh and new, to get two right is good," McGregor said post-match. "That's a positive – that's two possessions that we wouldn't have had if we didn't have that captain's challenge."

Sources have indicated the commission will give the rule the green light for the start of round one on Monday.

NRL head of football Graham Annesley didn't want to say much about the new rule when contacted on Sunday as he was wary it was yet to be given the official approval.

But he did like what he saw in the Charity Shield after a relatively slow start in the All Stars game.

"I thought in both matches where we trialled the captain's challenge – the All Stars game and the Charity Shield – it worked well. A decision will be made by the commission in the next 24 hours."