AFL to brief club chiefs about coronavirus this week

Coronavirus, concussion, Tasmania and the future of AFLW are all on the agenda for this week’s meeting of AFL club chiefs.

Presidents and chief executives of the 18 clubs will convene for lunch with AFL heavyweights including chief executive Gillon McLachlan and chairman Richard Goyder on Tuesday ahead of the league’s season launch function in Melbourne that night. 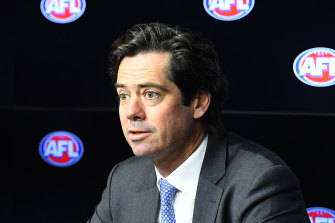 The Age has seen the agenda for the afternoon meeting, which makes reference to an AFL “coronavirus working group” as part of McLachlan’s scheduled presentation to clubs. The league has already shifted this year’s scheduled St Kilda-Port Adelaide game in Shanghai to Marvel Stadium after acting on the advice of health authorities.

McLachlan is on record saying that the league is well-placed to deal with any potential impact from coronavirus, which as of Sunday had claimed three Australian lives.

AFL fixture chief Travis Auld said last week that the league was taking government advice and, as things stood, there were no plans to move matches behind closed doors as has happened with recent Serie A soccer matches in Italy, where COVID-19’s toll is being heavily felt.

McLachlan is also set to brief clubs about the concussion landscape following the flashpoint late last month of Graham “Polly” Farmer’s CTE diagnosis. The spectre of a potential concussion lawsuit from past players, long-flagged by concussion campaigner Peter Jess, continues to linger, however the AFL has taken steps – including tightening protocols around its Sport Concussion Assessment Tool testing – to address concerns around head knocks.

Tasmania is also set to be discussed after last month’s report detailing the viability of a potential 19th AFL club to be based in the Apple Isle. The Tassie issue is particularly pertinent for both Hawthorn and North Melbourne, whose respective deals to play matches in Tasmania are due to expire at the end of next season.

The Hawks are also keen stakeholders in discussions surrounding the future of the national women’s competition. Hawthorn, Essendon, Port Adelaide and Sydney are the only four AFL clubs without AFLW sides, with both the Bombers and Hawks being vocal last week about their strong desire to join the competition as soon as possible.

“I know our members, supporters and key stakeholders feel equally as passionate about our entry into the AFLW competition," Essendon chief Xavier Campbell said last week.

“I can also confirm that we have recently written to AFL GM of football Steve Hocking to request clarity on the AFL’s position on the growth and future expansion of the AFLW competition and absolute certainty on our entry point.

The AFL is yet to publicly detail its timeline for the proposed entries into the competition of the remaining four clubs, however the league’s AFLW competition committee last year recommended an 18-team competition by 2024.

McLachlan is also scheduled to report back to clubs about the AFL’s bushfire relief fundraising efforts, provide an “officiating update,” a “financial and strategy update” and discuss the Marvel Stadium precinct redevelopment.