AFL boss Gillon McLachlan says the leadership of the late Graham ‘‘Polly’’ Farmer and his family will help the game take positive steps in the area of concussion.

McLachlan vowed that the AFL would continue to take any opportunity to ‘‘protect the head’’ in the AFL and that their priority was the welfare of players.

‘‘I guess my reaction was … what great progressive leadership from the family and from him, ultimately, to do this,’’ the AFL chief executive said, when asked how he had reacted to the revelation that AFL Legend Farmer had been given a posthumous diagnosis of severe stage three chronic traumatic encephalopathy (CTE), via a study that was released this week. 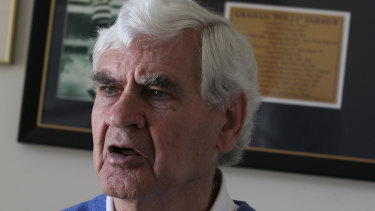 ‘‘I’m sure it’s going to help steps forward,’’ McLachlan said of the Farmer finding, which was only possible because of the decision of Farmer and his family to donate his brain to the Australian Sports Brain Bank.

Asked whether the AFL was prepared for further cases of head trauma and for the compensation payments that might ensue, McLachlan said: ‘‘Our priority is the welfare of our players and we continue to focus on prevention and the protection of the head and I think we’ve been making decisions on that envelope, back 15 years.’’

To the question of whether the tribunal-match review system could he harder on head-high contact, he said: ‘‘The league, I think for the last 10-15 (years), has been criticised by many for being too interventionist in the protection of the head. I reckon we made the head sacrosanct a long time ago and all the decisions and rule changes … a lot of decisions have been made to support that.’’ 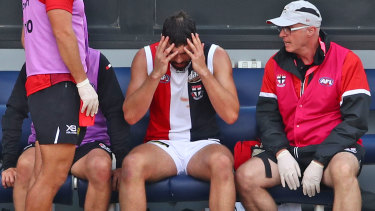 ‘‘I’ll let the doctors and physicians and others speak for themselves, other than to say I think there is differences of opinion across the medical industry … that sets the envelope of this conversation.

‘‘I take everything at face value. As I said, there are differences of opinion in the medical industry and my job isn’t to say who’s right or wrong, it’s to continue to work with our team to shape what the best advice is.’’

He said he would leave the issue of compensation for players with the AFL’s legal team, as the situation unfolded.

‘‘The lawyers will deal with that as it comes up,’’ McLauchlan said.

McLachlan would not venture an opinion on whether there would be future cases of CTE.