Non-binary football broadcaster Brihony Dawson had a two-word reaction to Wednesday night’s announcement by Carlton AFLW champion Darcy Vescio that they, too, identify as neither female nor male. 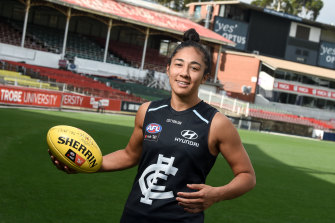 Darcy Vescio’s announcement that they are non-binary has been celebrated as a great advance for visibility of gender-diverse people.Credit:Justin McManus

“That whole premise of ‘you can’t be what you can’t see’ is important for young people, and also for older people because there is still so much shame,” they said.

“There’s a lack of understanding, but there is a willingness to understand that, just as strongly as you feel like you are a man or a woman, that’s how strongly I feel I am neither of those things.”

Vescio posted on social media: “just popping in to let you know that I am non-binary”.

“Sharing this feels a bit daunting but brings me a lot of warmth and happiness,” they said, adding they/them are their “most comfortable” pronouns.

The post was liked on Twitter 8200 times and celebrated widely in AFLW circles on Thursday as enormously positive for the recognition of gender diversity within and outside sport.

Vescio, the league’s top goalkicker in 2017 and this year, became the second elite AFL player to identify as non-binary, after the Gold Coast Suns’ Tori Groves-Little came out last week.

Former player and respected commentator Chyloe Kurdas said any time there is positive representation of marginalised groups, such as non-binary people, it helps to reduce discrimination.

Young people such as Vescio, 28, were helping to create “more freedom for older people in the LGBTIQ+ community”, who grew up in far more judgemental times, to “be really comfortable with who we are”.

“They understand the power they have, and the pushback…That they would take this on in the lead-up to the AFLW season starting is strategic, powerful and brave.″⁣

“There are people older than me who are still in the closet, struggling with their sexuality and gender representation and when Darcy comes out and says they’re non-binary, or a soccer player in the A-League says, ‘I’m a queer man’, it creates greater safety and freedom for people who didn’t get the privilege of growing up in a more open-minded society.”

Fellow football broadcaster Fiona Newton, of Joy FM’s Chicks Talking Footy show, commended Vescio for her history of activism on trans issues, which included wearing the transgender colours on her mouthguard at an AFLW pride game and ensuring they were also included in the design of the guernseys for AFLW pride games. 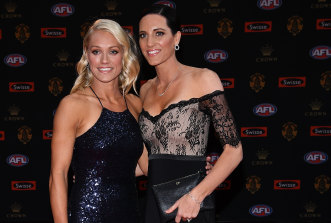 Vescio’s latest gesture helped to normalise diversity in the same way as the famous kiss shared by Adelaide Crows star Erin Phillips and wife Tracy Gahan when Phillips won the best and fairest medal at the league’s inaugural awards night in March 2017.

“People being able to see themselves represented on the football field is really powerful,” said Newton. 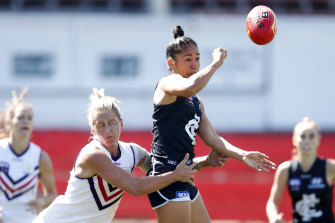 Darcy Vescio in action against the Fremantle Dockers.Credit:Dylan Burns

“I remember Erin Phillips kissing her wife and having her kids hold the premiership cup on the field; it just sort of normalised our families at the time the [equal marriage] plebiscite was on. It meant so much just to have that visibility.”

Emma Race, a co-host of popular football podcast  The Outer Sanctum , said: “there’s heaps of people in The Outer Sanctum community who are punching the air today saying, ‘thank you, Darcy, we now feel seen by you’.”

“Once again, Darcy is a ground-breaker in taking on a difficult topic and wearing that mantle themselves to signal to other people, and people who look to them, that it’s OK for them to declare who they are.”

Much courage was required to come out publicly when some people still argue loudly on social media that “there’s he, and she and nothing in between”, she said.

“When the marriage equality debate was being had in this country, Darcy stood up and said she was for it even before the club made a statement; they understand the power they have, and the pushback. And that they would take this on in the lead-up to the AFLW season starting [on January 7] is strategic, powerful and brave.”