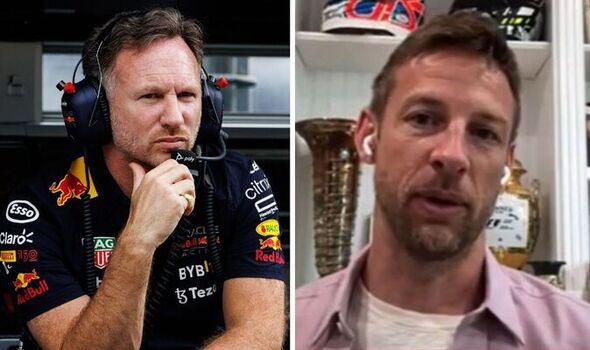 Jenson Button believes Red Bull have to shoulder some of the blame for the row between Max Verstappen and Sergio Perez as he believes they “put themselves in this situation”. Verstappen’s second consecutive title has long been wrapped up and Red Bull are also constructors champions for the first time since 2013.

But Christian Horner wants to complete the clean sweep with Perez securing second place in the championship too. The Mexican held a slender advantage over Charles Leclerc heading into the Brazilian Grand Prix.

And after the Ferrari driver crashed into the wall early in the race, Perez would have fancied his chances to extend his lead over Leclerc. But his championship rival recovered well while Perez struggled on the medium compound late in the race.

Perez ended up dropping behind both Ferrari drivers as well as Fernando Alonso having looked odds-on for a podium spot earlier in the race. Verstappen was next up and Red Bull gave him the green light to overtake Perez to try and go after those in front.

The Dutchman was unable to move up any further and Red Bull demanded he give Perez back sixth place, only for the reigning F1 champion to defy the order. Perez was openly livid with his team-mate while Verstappen defended his decision, saying: “I gave my reasons.”

Verstappen has been heavily criticised for not helping his team-mate in Brazil and Button can’t understand why the 24-year-old didn’t put his pride to one side. But the 2009 world champion also feels Red Bull are partly to blame for allowing the situation to arise in the first place.

“Max could have come out of this so well, the world champion letting his team-mate past so he can fight for second in the championship,” Button said on Sky Sport’s Any Driven Monday. “You’ve got to ask Red Bull, if they have discussed this beforehand as Max said then why are they asking him to do it in the race?

“It feels like they haven’t discussed it properly before the race weekend as a team and that seems like a bigger issue, it seems Red Bull have put themselves in this situation which definitely is negative marketing. It’s a real shame because like I say it could have been a perfect end to the race.

“The mistake in the early part of the race with Lewis was an incident we didn’t want to see, but to come out and say ‘here you go Checo, here’s a couple of points and now you’re second in the championship, we’re going to finish first and second’, it’s awesome.

“But that story is not the story we have.”