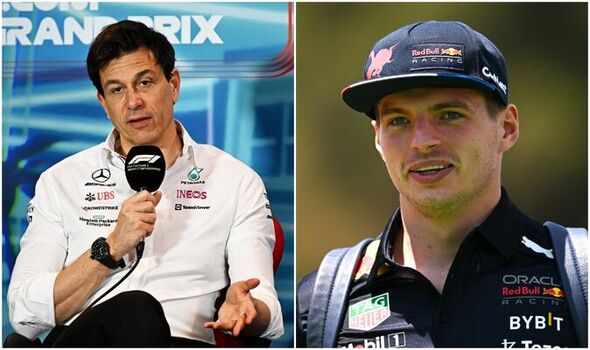 Mercedes chief Toto Wolff has applied pressure on Max Verstappen by claiming the Red Bull ace has it ‘easier’ this year compared to his world championship success in 2021. Verstappen has enjoyed a far better start to this season than rival Lewis Hamilton, and remains the favourite to retain the title.

The Dutchman controversially pipped Hamilton to the world championship last year. He overtook the Mercedes ace on the final lap of the last race in Abu Dhabi.

Verstappen has struggled for performance at times this season, failing to finish two Grands Prix. His issues have been nowhere near as bad as those suffered by Hamilton and team-mate George Russell in the new Mercedes W13 car.

Hamilton has recorded just one podium finish – in the first event of the year in Bahrain. He has finished in the middle of the grid in each of the other four Grands Prix.

Mercedes team principal Wolff believes Verstappen has it ‘easier’ than anyone else this year as he had the ‘worst’ car last term. The Austrian told Autosport: “Last year, Max drove a worse car and won the title. Now he has the fastest car, everything is easier for him, the pendulum is swinging in his favour.”

Hamilton has earned 36 points this season and sits sixth in the world drivers’ championship standings. Team-mate Russell is fourth with 59 points.

Wolff has not ruled out a world title push, with the majority of the season still to play. Asked if Mercedes had given up hope, he insisted: “No, not at all. We’ve only got the fifth race behind us, so you can’t write anything off, it can swing in our direction again. And in terms of points, we’re not far behind.”

Ahead of the Spanish Grand Prix, Wolff added: “Barcelona will be interesting for us because we tested there with a fast car in February. We want to continue there now. That could be a mini milestone in that direction. But we have to be realistic: we’re still only third behind Red Bull and Ferrari.”

Verstappen won his first Grand Prix in Barcelona aged 18. He will hope to move closer to championship leader Charles Leclerc in Spain this weekend.

The 24-year-old said: “We had an incredible week in Miami. I’ve had some time to rest with my family since and now I’m looking forward to driving in Barcelona again. I have a lot of good memories at the track from my first win in Formula One back in 2016 when I was 18.”