Padres’ top pitchers Mike Clevinger and Dinelson Lamet left off roster vs. Cardinals due to injury

SAN DIEGO — The San Diego Padres waited 14 long years for this day, but before even stepping on the field Wednesday for Game 1 of the Wild Card Series against the St. Louis Cardinals, they were dealt a cruel blow.

San Diego's top two starters, Mike Clevinger and Dinelson Lamet, were left off the active roster for the series.

The team held out hope, and was even optimistic Monday, but determined that neither player was healthy enough to pitch, at least in the first round.

“Ultimately, we didn’t feel comfortable enough that both guys would be going out and throwing 80-plus pitches in starting roles,’’ Padres GM A.J. Preller said. “We’re looking at the short term and the long-term.’’

It’s possible, Preller said, that they could be available for the Division Series.

The Padres will go with Chris Paddack in Game 1, Zach Davies in Game 2 on Thursday and use a bullpen-by-committee Friday if there’s a Game 3. The Cardinals are scheduled to go with Kwang Hyun Kim, Adam Wainwright and Jack Flaherty.

“There’s nobody that’s going to be sorry for us,’’ said Padres manager Jayce Tingler, who will have a 14-man pitching staff at his disposal. “We talked about being able to adapt, move on the fly, and we’ve been talking about how we need guys to step up throughout the year.’’ 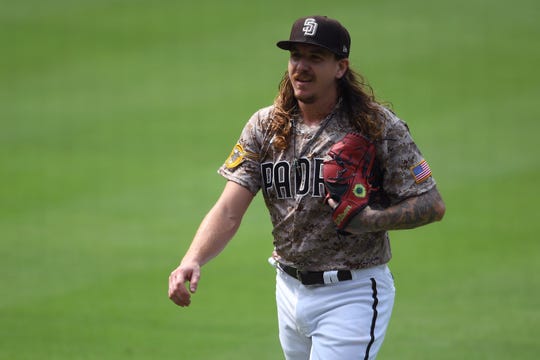 Mike Clevinger had a 2.84 ERA in 19 innings for the Padres after a trade from the Indians. (Photo: Orlando Ramirez, USA TODAY Sports)

No matter how you spin it, it's still a huge blow.

“It legitimately will be a day-to-day thing,’’ Preller said. “I have a lot of faith in our guys. We’ll take the weekend and evaluate if we’re lucky enough to advance.’’

Clevinger, who was diagnosed with an elbow impingement when he left his last start Friday after one inning, was given a cortisone shot and threw an aggressive 23-pitch bullpen session Tuesday, but the Padres’ medical staff advised he needed more rest.

Lamet, diagnosed with biceps soreness after leaving his last start, played long toss Monday and may have a better chance than Clevinger to return if they advance.

“We feel like we’re doing the best thing possible,’’ Preller said. “We’re not looking for them to be less than 100%. We think a little more rest would be beneficial for them.’’