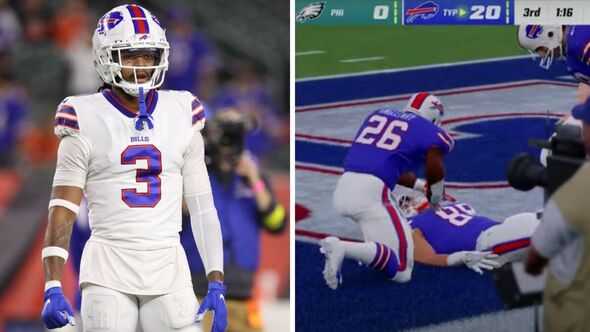 EA Sports are set to remove a touchdown celebration that simulates giving CPR to another player in the wake of Damar Hamlin’s cardiac arrest. The NFL star, who had to be revived on the field amid worrying scenes, has since been discharged from hospital and is back in Buffalo.

Last week, the crucial game between the Buffalo Bills and Cincinnati Bengals – which was set to play a big role in deciding the first seed in the AFC – was suspended following Hamlin’s collapse. With just under six minutes remaining in the opening quarter, the 24-year-old fell to the turf after making a tackle and had to be revived on the field before he was rushed to the University of Cincinnati hospital.

On Thursday, University of Cincinnati Health physicians Dr. Timothy Pritts and Dr. William Knight announced Hamlin began to wake up that morning, while they confirmed his neurologically function was intact. His breathing tube was removed a day later and he was remarkably able to speak to his family and Bills teammates via FaceTime.

Hamlin has since been released as his remarkable recovery continues, and EA Sports are hoping to do their part by removing the CPR celebration through an update which is set to be rolled out in the next few days, according to TMZ. Madden players were able to celebrate a touchdown on the game by getting their players to mimic CPR on the individual who scored.

Following Hamlin’s collapse and cardiac arrest, many users found the animation to be insensitive which has prompted the decision by EA Sports to remove it from Madden. However, other players clearly do not share the same enthusiasm as the celebration was seen in Sunday’s clash between the Pittsburgh Steelers and Cleveland Browns.

After sacking Deshaun Watson, Steelers linebacker Alex Highsmith lay on the ground and received CPR. He apologised for his role in the post-play celebration on Monday amid social media users criticising the Steelers for their ‘unprofessional and disgusting’ antics.

While Pittsburgh’s actions were disheartening, Hamlin’s progress is certainly uplifting as the safety is out of hospital. He took to social media to tell fans he would be going to Buffalo General Hospital for tests while praising the support he has received.

“Headed home to Buffalo today with a lot of love on my heart,” Hamlin tweeted. “Watching the world come together around me on Sunday was truly an amazing feeling.

“The same love you all have shown me is the same love that I plan to put back into the world n more. Bigger than football!”

He later added: “Grateful for the awesome care I received at UCMC. Happy to be back in Buffalo. The docs and nurses at Buffalo General have already made me feel at home!”