MESA, Ariz. — Chicago Cubs third baseman Kris Bryant, one of the intriguing and cerebral players in the game, tries to quietly blend into the mundanity of spring training, but it’s proving to be impossible.

He talked about losing his service-time grievance against the Cubs when he showed up to camp three weeks ago, insisting there’s no hard feelings.

He joined his peers ridiculing Commissioner Rob Manfred calling the World Series trophy “a piece of metal,’’ and after Manfred’s apology, doubled down saying the comment was stated intentionally.

He’s been on the trading block all winter, has a sit-down with president Theo Epstein who tells him that he’s likely to stay as long as the Cubs are in contention, only to hear rumors that the Cubs still are entertaining offers.

He was the Rookie of the Year, MVP and a World Series champion in his first two years in the majors, and now is defending himself from the critics who wonder if his best years are behind him at the age of 28.

Bryant sat down with USA TODAY Sports before he returns home to Las Vegas this weekend for a two-game series against the Cincinnati Reds, answering anything and everything thrown his way.

Question: Are you treating this year any differently considering you could be traded at any time, and are a free agent in two years, having already rejected long-term contract proposals.

“I’m really trying to enjoy it because I’m not going to be here forever, no matter how much we want it to be.’’

Q: You understand why the Cubs have let teams know you’re available in trade talks?

Bryant: “I understand. I’m over it. I don’t have any control over it, so what are you going to do? It’s something I learned in college. You got to control the controllables. And I can’t control what people say or what people think, or what people do in regards to my career. But I can control how I approach my work day, how I treat people, and how I treat my family. All of that stuff is way more important to me." 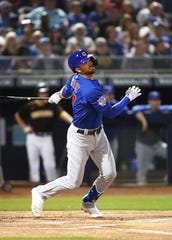 Q: Considering you could be traded at any time now, how important is getting a no-trade clause in your free-agent contract?

Bryant: “I think that might be the most important thing to me. It just gives you clarity in where you’ll be. If you have that in your contract, you know the team’s 100% committed to you being there. You’re their guy. It’s never in your mind about being traded. That’s definitely a very comforting feeling.’’

Q: Is it an advantage or disadvantage being a free agent when the collective bargaining agreement expires at the same time.

Bryant: “I thought about it, but I don’t know. I’m certainly thinking there will be a fight, not for me, but for players in general, fighting for what we believe in. But I don’t know how it will affect me. What if the rules completely change, and it’s like a free-agent bonanza?"

Q: If you had one wish, what would you change in the next CBA?

Bryant: “I think we need to look at how early in your career you provide so much value to a team, and you’re a significantly huge bargain. And then when it’s your turn to fight for your value, people only want to see what you’ve done recently.

“I just feel like we should definitely change that structure where you’re paid earlier on, and are quicker to arbitration and free agency, stuff like that. Certain things we should totally fight for. I just think there are ways to get both sides happy, and hopefully both sides can come together, and we can get to that point.’’

Q: Where you encouraged by this past winter’s free-agent market?

Bryant: “Yes, definitely, I thought it was good. You saw teams spend and get good players. Everybody is making more and more money in the game, so why not spend?

"I just saw the Braves release their revenue (franchise-record $476 million in 2019). It definitely gives us a point of reference. It’s nice to see those numbers being released because with most teams, you have no clue. The fans don’t know. Everybody knows all of the teams are making money, but it’s never reported.

“Maybe that’s something that can change. We’re always held accountable for everything that we do, answering questions whenever we make an error or something, so more questions should be asked to (owners). There’s no way anyone is losing any money.’’

Q: Is there a concern that with so many players bashing the Houston Astros and angry that the players received no discipline, it could splinter the union in these upcoming negotiations?

Bryant: “I don’t think so at all. When it comes down to it, players are willing to get together and fight for the things that we believe in. It’s unrelated. What the Astros did is a whole different situation. It was a competitive advantage in the field that was unfair.

“Certainly, you can be upset with what they did. It’s just us being human. It’s like if I’m playing a Monopoly game, and my brother is stealing money from the bank, I’m going to be mad.’’

Q: You feel sorry for the abuse the Astros are taking?

Q: Would you have spoken out against it your rookie year if the Cubs were illegally stealing signs?

Bryant: “Looking back at my rookie year, I was very comfortable. I felt I had a voice. I felt like I could say some things in clubhouses, and people would have respected me for what I’m saying. So, I totally would have had that conversation with people that have been here for awhile.’’

Q: How do you assure the illegal sign-stealing will stop in the game?

Bryant: “I don’t know how to stop it. I feel that if people want to do things like that, people will find a way to do it. Let’s just focus on the game and compete against each other. It’s just a baseball game. I know there’s a lot of money involved in people that want to see you win, but I think if we approach it as just a baseball game, give it all you got, that’s enough. It’s what we’ve done since we were (kids). So why are we changing that?

“We have kids watching us play. They look up to us. They don’t want to see this. What kind of message are we sending? We don’t want to have kids thinking this is Ok. Not my son. I know technology is different today, but cheating is cheating.’’

Q: You believe the Astros were the only team illegally stealing signs?

Bryant: "No. Absolutely not. I definitely think others were. I don’t know if other teams were doing it that same way, but people are always trying to find a way for that competitive advantage.

“Pitchers have things in their gloves. Batters groove their bats. People have done that since the beginning of the game.’’

Q: Do you believe the Astros were still cheating in 2019?

Bryant: “All we have to go is their word. I don’t know. But last year when they added an (MLB employee) to sit next to the live feed, I don’t know how you would get around that?’’

Q: How do you like MLB’s new playoff proposal, adding two more wild-card teams to each league, and having the team with the best record choose their first-round opponent?

Bryant: “I mean, it’s certainly interesting. It might make teams more competitive. But on the other hand, it can make the playoffs longer. It’s also kind of a weird format picking teams and stuff to play against each other. It kind of feels like backyard baseball. I don’t know if that’s something we want to explore.

“I think we would have been a playoff team last year with our record. But did we deserve it? No! So I think it would produce some teams that don’t deserve to be there. But if it makes teams more competitive over time, maybe that works out.’’

Q: How do you feel about the three-batter minimum rule for pitchers?

Bryant: "I like it. I hate at the end of the game when it’s all the back-and-forth. Do match-ups really matter? I don’t know. I don’t believe in matchups too much."

Q: Would you like to see MLB adapt the minor-league rule of having a runner starting at second base in extra innings?

Q: Do you still believe that Manfred deliberately used the phrase, “piece of metal,’’ when describing the World Series trophy?

Bryant: “I do. That’s tough wording. Really tough wording. But in today’s day and age, you’ve got to be more and more careful what you say and how you say it. So yeah, I stand by it. I think everybody stands by it.’’

Q: Do you get motivated with the critics questioning your status as one the game’s elite players, and whether the Cubs are still a playoff contender?

“I don’t really care what they have to say. I’ll move on with my life. You move onto yours.’’

Q: Do you really believe Twitter is the worst thing ever invented?

Bryant: “Oh, by far. By far. I mean, obviously, there’s a lot worse things in this world than Twitter with people struggling and people sick, and things like that. But on the surface of what we do, and our interaction with people, Twitter is by far the worse.

“People have problems, but Twitter just takes those problems to 100 levels above the actual problem. Just the constant back-and-forth. Nobody needs to show their face or are accountable what they have to say or anything.

“They’re coward. Most people on Twitter are cowards. That’s why I’m not on Twitter. I’m not a coward.’’