Australian offensive lineman Daniel Faalele has been selected by the Baltimore Ravens with the 110th pick in the 2022 NFL draft, becoming the heaviest player in the league.

Faalele hails from Melbourne and stands at 203 centimetres and weighs in at 174 kilograms, making him the fifth heaviest player in NFL history. 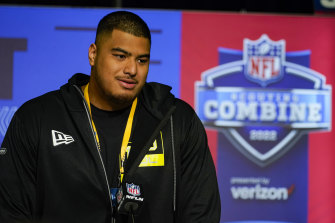 Faalele is from Melbourne and knew very little about American football when he first made the switch.Credit:AP

The 22-year-old offensive tackle was selected in the fourth round of the draft, on Sunday morning (AEST), but had been touted as a potential second- or third-round pick.

Faalele has a rugby and basketball background and left Melbourne to pursue his American football career in the United States as a 16-year-old after being spotted by University of Hawaii scouts. He played high school football for IMG Academy in Florida before attending the University of Minnesota to play college football from 2018.

“It definitely feels super fast. I remember it like it was yesterday leaving home and making that tough decision,” he said. “But everything happens for a reason and its worked out for the best. I wouldn’t change anything.”

Faalele said he had “a good feeling” about the Ravens after he met with Baltimore’s offensive line coach Joe D’Alessandris before the draft.

“He just gave me that confidence I’m in good hands. I had a good feeling there that we would be a good fit, and I’m just happy that everything worked out,” he said.

Baltimore head coach John Harbaugh said his recruit’s journey to the NFL was “a great story” that began when his brother – University of Michigan coach Jim Harbaugh – spotted Faalele at a training camp Jim held in Australia.

“He was there as an athlete, as a rugby player, and Jim was like: ‘You ever think about playing football?’” Harbaugh said.

“He ended up going to a Hawaii camp, then he got noticed, and he ended up coming back through IMG in Florida. Then Jim didn’t get him as a recruit. I don’t know what happened!”

Faalele is viewed as a long-term prospect with tremendous potential given his size and relative inexperience, being compared to former Ravens Pro Bowl tackle Orlando Brown jnr.

During his college football career, Faalele was named to several All-Big Ten representative teams and started at right tackle in 31 of his 34 career games.

As a player dedicated to blocking opposing rushers, the new draftee rarely touched the ball. However, a highlight of his college career was an unconventional rushing touchdown that he scored against West Virginia last season.

Ravens general manager Eric DeCosta said he first noticed Faalele as a potential NFL footballer three years ago while he was playing in Minnesota.

“The first thing you notice is size. But then you are struck by how well he moves for that size, and then he is just consistently knocking people off the ball,” DeCosta said.

Faalele has followed a similar path to fellow Australian offensive lineman Jordan Mailata – both have a rugby background. Mailata plays for the Philadelphia Eagles and has established himself as a strong starter at offensive tackle, signing a four-year, $US64 million (about$90.5 million) extension last year.