On the eve of March, NCAA tournament bubble teams squared off for another jam-packed slate of games on Saturday. Some teams on the right side of the bubble stained their résumés. Others on the outside looking in bolstered their credentials — or did the opposite. Here's a look at how each fringe team fared and whether they're in the projected field.

Clemson (out): The Tigers (14-13, 77 NET score) stunned Florida State 70-69 to revive their NCAA tournament hopes after falling to the "life support" category of USA TODAY Sports' bracketology in recent weeks. The ACC hasn't been as dominant as it has been in years past, but there are still opportunities to enhance the profile, which is exactly what Clemson took advantage of on Saturday — picking up a much-needed Quadrant 1 victory. This team is still far off of being on the right side of the bubble, but winning marquee games is always a recipe for success heading into March. 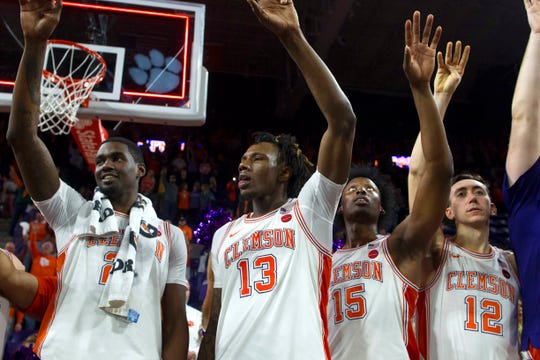 North Carolina State (in): The Wolfpack (18-11, 57 NET score) defeated Pittsburgh 77-73 on their home floor for a Quadrant 3 win. Not exactly a huge profile boost, but it avoided another Quad 3 loss (N.C. State has three already), which this team really couldn't afford. Coach Kevin Keatts' team has five Quadrant 1 victories, including a marquee win against Duke. It entered the day as one of the "last four in" and will likely be safer.

Providence (in): The Friars (17-12, 50 NET score) picked up yet another Quadrant 1 win, this time beating Villanova 58-54 on the road to make for eight Quad 1 victories on the profile — far more than any bubble team. It's a huge draw for a peculiar résumé that also features a Quadrant 4 loss and poor non-conference slate. Still, that's four big wins in a row for a team that vaulted to a projected No. 11 seed in the last week.

Oklahoma (in): Entering the day as a projected No. 11 seed, the Sooners (18-11, 49- NET score) made a statement by easily handling West Virginia 73-62. That gives Oklahoma five Quad 1 victories, no bad losses and a top-25 strength of schedule — a solid-looking portfolio heading into March. It also has two consecutive wins against ranked opponents (Texas Tech being the other) this past week heading into March.

Mississippi State (out): The Bulldogs (19-10, 54 NET score) fended off SEC bottom-feeder Missouri 67-63 on the road to inch closer to the 20-win column. MSU is in desperate need of Quadrant 1 wins on its résumé (it only has two) and Saturday wasn't going to provide it, but winning is key on the closing stretch for all borderline teams.

Florida (in): The Gators (18-11, 32 NET score) started the day as a No. 10 seed and had drifted closer to the safety zone. But Saturday's 63-58 road loss to fellow bubble team Tennessee might deter Florida's trajectory. The SEC is loaded with bubble teams and Florida right now has the best tournament portfolio of all of them — sporting a top-10 non-conference strength of schedule and no bad losses. But winning at Tennessee would have given the Gators another Quad 1 victory to help secure their likelihood to go to the NCAAs. Now there's more to prove. 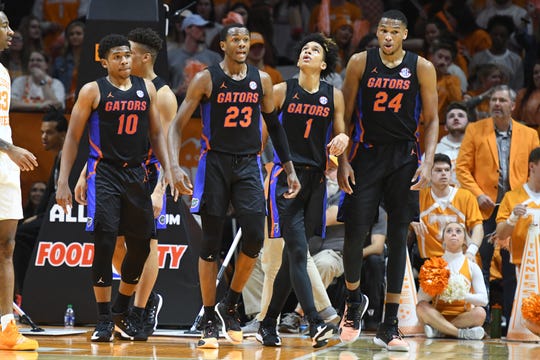 Syracuse (out): Already on the outside looking in, the Orange (16-12, 59 NET score) didn't do themselves any favors by losing to a 12-17 North Carolina team at home, 92-79. There are not enough wins on this profile to see envision coach Jim Boeheim's team making it to the NCAAs. Syracuse has a decent road victory against Virginia but other than that, the profile is pretty bare.

Notre Dame (out): The Irish (18-11, 55 NET score) likewise couldn't really afford a bad loss, which is what it got in a 84-73 decision vs. Georgia Tech. That outcome likely ended any chance for an at-large bid given that Mike Brey's team has a non-conference strength of schedule of 295 and just one Quad 1 victory.