Why Norman and LIV are winning golf’s civil war

For all the distaste aroused by LIV Golf, the rebel tour’s maverick antics do suggest a certain diabolical genius. Just when it looked as if all roads to the legitimacy of world ranking points were closed off, Greg Norman, ringmaster of the Saudi-backed breakaway, swerved down the byway of the MENA (Middle East and North Africa) Tour, an operation that has barely functioned since March 2020, when it staged an event in Jordan that cost $600 for a journeyman professional to enter.

Today, according to MENA, all 69 LIV renegades have joined. Who in golf ever thought they would witness the moment when Phil Mickelson and Dustin Johnson, two of the richest men in sport, would become members of a dormant Middle Eastern development circuit? Such is the havoc that the sport’s most toxic schism has wrought.

In all the extravagant mischief-making for which LIV has become synonymous, swooping to capture not just British Open champion Cameron Smith but a European Ryder Cup captain, the MENA move might well be the most audacious yet. It is not simply the fact that Norman has joined forces with a tour whose last order of merit leader earned $35,000 — roughly what a LIV event winner would earn for a shot — but that the exercise has been branded a “strategic alliance”, the term that the PGA and DP World Tours used to describe the partnership they hoped would head the Saudis off.

How naive that hope now looks. For the more Norman is thwarted, the more intransigent he becomes. Yes, he can be a wearisome braggart, but he is also a fiercely single-minded businessman who loves nothing more than a bitter scrap. He has often been fond of citing Jack Welch, the late United States business magnate known as “Neutron Jack” for his ruthless style, as an inspiration.

“Jack was so street-smart, and that’s what he instilled in me,” Norman told a Forbes journalist last year. “He was methodical. He just got it done.” Not that LIV’s collaboration with MENA would count as a convincing case of “getting it done”. Will the Official World Golf Ranking board honour the deal by giving the rebels the stamp of approval they crave? And if so, how will the points be weighted? The portents are hardly promising. At the MENA Tour Championship in 2017, only the top seven players in a field of 55 were rewarded with points at all.

Other factors militate against LIV being recognised in the way Norman would like. The ranking board is unlikely to act favourably towards a tour whose events are constituted as 54-hole, no-cut affairs. How does this square with the ranking system’s rule that there must be a cut after 36 holes, or that eligible tours “must average fields of at least 75 players over the course of each season”? 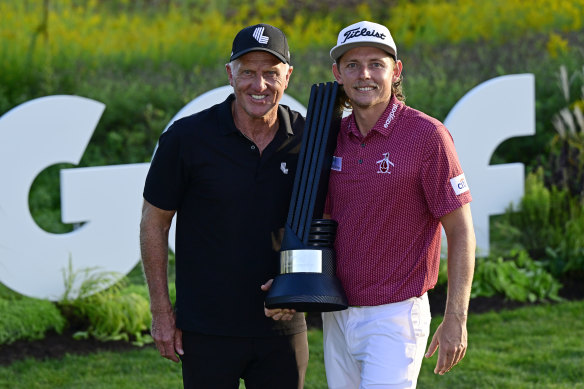 Add this to the sheer opacity of the ranking board, a body that does not describe any of its processes publicly and sometimes delays approving minor tours’ applications for inclusion for two years, and you can see that Norman faces a tortuous road ahead. But the Australian is nothing if not defiant. He is already piqued by the R&A’s decision not to invite him to this year’s 150th Open, decrying it as a “petty, cheap, childish shot”. Now, given the opportunity to attack golf’s establishment, he is willing to strike whatever deals necessary.

Once, it might have been fashionable to laugh at Norman, to see him as a Saudi puppet upset by the PGA Tour’s sabotage of his plans in the 1990s to create a global circuit. No longer.

Backed by an almost unlimited supply of Saudi wealth, he has engineered the most audacious coup in golf history. LIV’s format might be turgid and mercenary, but it features 12 of the past 24 major champions. And just when his project threatens to be mocked as a home for hasbeens and nearly men, he enlists Smith, perhaps the most electrifying young player on the planet.

The MENA announcement is borne of similar motives. If you tell Norman something cannot be done, he diverts to a long-forgotten backwater to prove that it can. It should serve as a salutary warning to the main tours. Not only have they been royally outspent by the LIV interlopers, they are in serious danger of being outsmarted, too.