The round former Masters champion Adam Scott carded on Sunday (AEDT) during the Farmers Insurance Open was a study in highs and lows. Momentum in either direction absorbed more punishment than the Washington Generals.

The 40-year-old Aussie found the South Course at Torrey Pines all kinds of saucy in just his second trip to the Farmers.

The start: bogey, birdie, birdie, double bogey. A four-hole flourish to cap the front nine caused the big black number on No.4 to fade away: birdie, birdie, par, eagle. No other player carded two-under on No.9 the entirety of the opening three rounds. 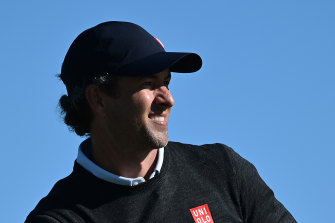 Adam Scott had a wild third round at the Famers Insurance Open.Credit:Getty Images

In spite of all those fairway fireworks – including bogeys on three of his final five holes – Scott found himself in a five-way knot for third at eight-under, two strokes off the lead and within striking distance of his 15th win on the PGA Tour.

“I try not to have them like this, generally,” Scott said. “On tough tracks, stuff can go wrong. And this is a tough track.”

Two trips in, the Farmers has proved as rocky as San Diego’s rugged coastline – and just as breathtaking and spellbinding. Scott, who finished as the runner-up to 2019 winner Justin Rose, missed nine fairways and nine greens yet lived to tell the tale.

“There was lots of good stuff in there,” said Scott, who will turn 41 in July. “Unfortunately, I was out of rhythm on that back nine and I couldn’t get in a good spot. You don’t want to be left putting from 10 feet out here. It’s really tough to make them late in the day.“

The round proved gemstone-perfect one hole, then downright hostile and vindictive the next.

Following his birdies on Nos.2 and 3, Scott thrashed on the par-four No.4. His body language at the tee revealed that his drive drifted left into something kindly and diplomatically known as the “native area”. Basically, it’s an overgrown and unwelcoming mess.

Scott’s next shot after a drop found a greenside bunker about 50 feet from the cup. Two putts later, his round had been bruised with a six.

Instead of crumbling under the ugly turn of events, the man ranked No.1 in the world back in 2014 scooped up back-to-back birdies at six and seven to regain his footing. Then on nine, he gobbled up 291 of the 292 yards remaining on his second shot before burying the eagle putt of less than four feet. 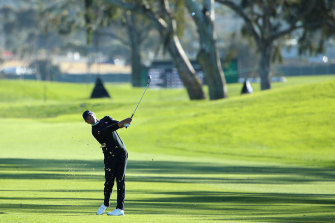 Scott is in with a chance to win on Monday.Credit:Getty Images

“Sometimes being old and experienced is helpful on days like this,” Scott said. “I generally don’t panic out there. I just do my best to keep going through my routine and trust it will all work out.“

The wild, wacky round swings no doubt taxed.

The South Course, with a demanding resume strong enough to land the US Open in June, grinds most who flirt with danger to often into fine dust. As analyst Nick Faldo said on the CBS broadcast, “There’s no gimmes out here … there’s no let-up holes.“

Walking elbow to elbow with peril routinely proves fatal on the South.

Not for Scott. Not on this day. Even as unpredictability continues its reign.

Scott’s birdie on No.13 that momentarily thrust him into the lead at 11-under became a short-lived perch. One hole later, he found himself back in that thorny native area on the edge of a canyon with a one-stroke penalty for his lack of good fortune. He left with a bogey, back sliding into a three-way tie for the lead.

The sum of it, dizzying.

Auditioning to join The Flying Wallendas was a high-wire act that became must-watch TV as the thrills and spills hopscotched across his scorecard.

The fitting part: On a day Scott logged five birdies and an eagle, he finished dead even for the round.

The “broom-handle,” leave-the-pin-in putting approach of Scott flipped a switch this week at Torrey Pines. He came in ranked 113th in shots gained putting in the short, five-event start to the current wraparound season. He rose to No.4 among the field after Friday and, despite the theatrics in round three, stood at a solid 20th.

Another sign of Scott’s game holding grand potential this week came in the form of eagles in each of the first three rounds.

His Monday prospects: Stormy with a chance of winning.

“If I can just kind of find about 16 really good holes and limit the damage out here, I think I’ve got a good shot at it,” Scott said. “It can turn around quick. There’s opportunities if you hit good shots and you get penalised if you hit bad ones. So, I’ve got to find a bag full of good ones.”

Fist-fighting to a victory would be enormously impressive.

“I really like playing here,” Scott said of his very limited, successful Farmers experiences. “I’ve spent a lot of time in this area over the last 20 years. I hope there’s the opportunity for me to come back many years in the future.

“A win would certainly influence that decision.”

After what he’s gone through, can you blame him?