Tszyu predicts brains will prevail over brawn against Inoue

Moments after they faced off for the first time, Takeshi Inoue was asked for his initial impressions of Tim Tszyu.

“He’s got a small head,” Inoue observed. “It means it might be harder for my punch to land.”

The build-up to their fight to date has been about size; namely, the size of Inoue’s muscles.

The Japanese fighter cut an imposing figure when splashed across the back page of the Herald shirtless during the week. The size advantage Tszyu has enjoyed during his previous 19 fights will be nullified for the first time.

“I couldn’t care less about my body,” Tszyu said. “As long as I’m feeling fit and strong, that’s the main thing. It’s not a body-building contest – it’s a fight. I saw a few photos. I saw he was ripped. I’m quite happy for him that he’s got himself into a real good shape and he’s confident. 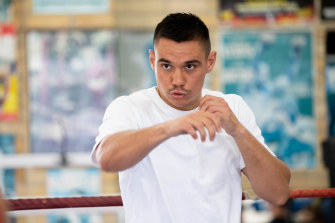 “There’s no better feeling than facing a confident fighter and then take the soul out of them. The best thing about boxing is muscles don’t win fights. Everyone knows that. You could be in the best shape but it all starts in [the head].

“I’ll be 10 steps ahead of him before he knows what he’s doing. This fight is all strategic, a bit of patience and the knockout will come.”

Tszyu is of the opinion that brains will trump braun when he takes on the WBO’s seventh-ranked boxer at Qudos Bank Arena on Wednesday. The undefeated Australian believes it will take about one round to work out Inou’s movements and then it’s just a matter of time before he lands the telling blow.

The 27 year old has knocked out his past five opponents and believes that his skill will ensure Inoue will become the sixth. However, for the record, Tszyu believes he has Inoue covered physically as well. 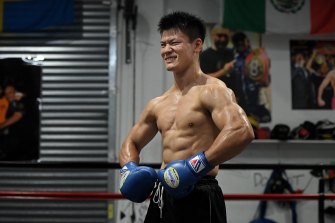 Takeshi Inoue shows off his chiselled physique on TuesdayCredit:Kate Geraghty

Inoue is the best-credentialed fighter Tszyu has faced. The son of hall-of-famer Kostya conceded he would need to be more circumspect in the opening exchanges of next week’s bout than he was against recent opponent Dennis Hogan. Tszyu felt it would take more to fell Inoue than it would to bring down many of the flashy boxers currently coming out of the United States.

“A lot of those Americans are very slick but sometimes they don’t have a heart and they’re easy to break down,” he said. “These type of fighters are different. They keep coming forward. They get hit, they keep coming.

“This fight’s going to be very strategic and I’m going to have to play around with my shots.”

Despite Tszyu’s head providing a smaller target than he expected, Inoue believes he will find it.

“I will beat him sometime in the middle rounds of the match,” he said.