Taylor breaks silence on quitting after taking one punch from Swarmz 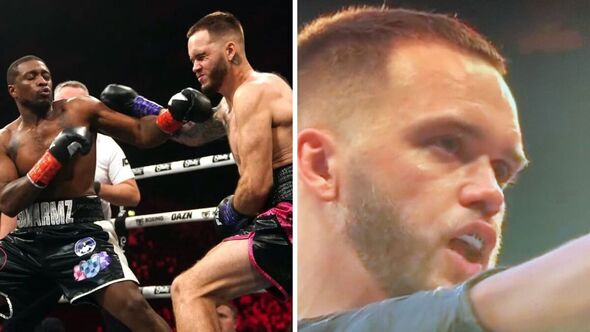 Ryan Taylor has broken his silence after quitting within a minute of his crossover boxing bout against Swarmz on the KSI vs FaZe Temperrr undercard last night. The YouTube star withdrew from the contest after taking just one clean jab.

Post-fight, Taylor’s eye began to swell up badly with many suspecting that the Brit has broken his orbital bone. Posting to his Instagram story after the disappointing result, Taylor wrote: “The glove caught my f***ing eyeball. I can’t see s***. Mad…”

Taylor falls to 0-4 in crossover boxing as he continues his search for an elusive win inside the squared circle. The Brit lost his debut via DQ to DK Money before taking vicious beatings at the hands of Anthony Taylor and Slim.

But for Swarmz, it was redemption after getting battered from pillar to post by KSI in his debut back in August. Since then, the rapper has doubled down on his training and reaped the fruits of his labour on fight night.

Speaking to the DAZN broadcast post-fight, Swarmz said: “It was a touch, we call it a likkle touch. I’ve been working hard for this moment as everyone saw me get battered by KSI, calling me a ballerina. It’s been playing on my mind so I had to get redemption.

“I’m a musician that has come into the boxing game I can’t wait bro. Next fight I’m ready. Where’s Deji? Where’s King Kenny? All the respect, I’m a fair guy. Deji and Kenny are top of the game, top five. I can’t wait for it to happen.”

Slim outpoints Zanetti in brutal war and calls out KSI

Swarmz’s victory was followed up by a win from the other man who fought KSI on the same night in August – Luis Pineda. The Mexican was announced as the Misfit’s 4 mystery opponent and convincingly outboxed opponent BDave to make it 2-0 to the duo on the night.

Both men have seemingly established themselves as regulars in the crossover boxing scene and are expected to have an active 2023. KSI, meanwhile, continued on his collision course with Jake Paul by knocking out FaZe Temperrr in the first round.