Claressa Shields and Savannah Marshall will square off for the undisputed WBC, WBA, IBF and WBO middleweight world titles at the O2 Arena on September 10.

The eagerly-anticipated bout, after months of verbal sparring between the pair, was finally announced on Tuesday afternoon, with Mikaela Mayer and Alycia Baumgardner the chief-support as they fight for the WBC, IBF & WBO super-featherweight world titles.

The bout will be Britain’s first-ever televised all-women’s professional boxing card in what is another landmark moment for the sport. 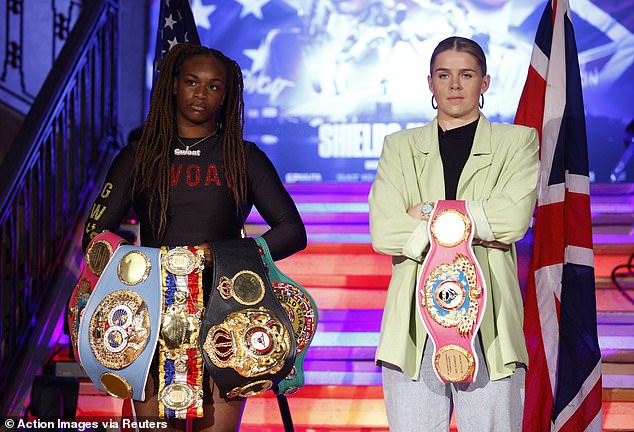 Shields comes into the bout as one of the most decorated fighters in women’s boxing, being a two-time Olympic gold medallist and previously reigning as undisputed champion in both the middleweight and super-welterweight divisions.

The American, who brands herself the GWOAT, currently holds the WBC, WBA and IBF titles, and has lost just once as an amateur or a professional.

That came in the amateurs against her impending opponent, Marshall, who holds the WBO middleweight belt, a strap she claimed with victory over Hannah Rankin in 2020.

The 31-year-old has defended her strap on three occasions since with victories over Maria Lindberg, Lolita Muzeya, and, most recently, Femke Hermans.

‘It’s finally here. All sports need major rivalries to transcend their boundaries and this is the biggest rivalry ever to come from women’s boxing,’ said promoter Ben Shalom.

‘This is a major moment for the whole sport of boxing, a transatlantic fight which will bring new light to the sport.

‘Two major stars, two elite athletes, two personalities and a story that you could not make up.

‘Thank you to all the promoters and managers involved to make a fight that many thought could not happen. A historic night awaits at the O2.’