Thanks to Jae'Sean Tate, the Sydney Kings are through to their first NBL grand final in 12 years.

Not since 2008 have Sydney been on the NBL's biggest stage but they beat Melbourne United 89-87 in a see-sawing thriller at Qudos Bank Arena on Thursday night to snap that streak. 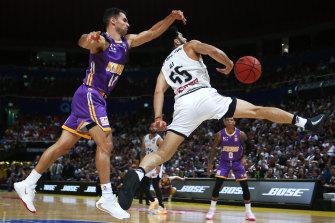 Kings captain Kevin Lisch with Shea Ili of Melbourne United for a rebound on Thursday night.Credit:AAP

The series decider was nothing like the series opener – in which the Kings overcame a 16-point deficit to finish over the top of United – or the 45-point game-two blowout in Melbourne.

Kings MVP Tate led the charge with 20 points, Xavier Cooks was crafty around the rim on his way to 14 points and Casper Ware kept putting up shots all night. He finished with 15 points.

Sydney only needed one of their stars to step up. Tate put the Kings on his own back as Ware struggled to find his shot and finished the night with more points than any other Sydney player.

He stepped up in the clutch, too, as he has all season long.

It was bucket-for-bucket basketball. Every rebound was clawed over. No free baskets. Play-offs at their very best.

Sydney were certainly the beneficiaries of a friendly whistle from the officiating crew but at half time, they had made just 12 of their 21 free-throw attempts.

Melbourne's stars had started to make their mark.

You'd be hard pressed to find a sport in which star power is more important in must-win games and on Thursday night – with a spot in the NBL finals awaiting the winner – it showed.

Goulding had 19 points at the break. Trimble had 11 next to his name.

The Kings' scoring was spread evenly. Andrew Bogut and Ware had not yet found a consistent rhythm. 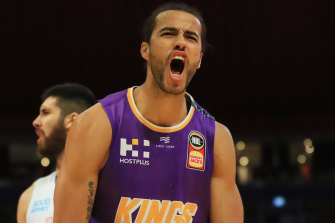 Xavier Cooks was among the Kings’ best against Melbourne United.Credit:Getty

Tate, Cooks, Didi Louzada and the Kings' defence provided the spark Sydney were missing in the first half.

With one quarter left to decide who would host the NBL finals, the score was tied at 68-all.

Time for those stars to step up again. Enter Tate. He finished the lay-up at the rim to give Sydney a four-point lead at 89-85 with just under 90 seconds to play.

Melbourne weren't able to reel that margin back.