Much like his Melbourne United team, import guard Caleb Agada just needed to see the ball go through the net.

The Nigerian international saw this happen just seconds into Thursday night’s clash with the Sydney Kings and it kicked started Melbourne’s night and perhaps their season in an 89-47 thrashing at John Cain Arena.

The Kings set a new club record with 47 points their worst tally in history while they shot 15 of 71 from the field and 5 of 36 from three-point the line. Sydney missed injured point guard Jaylen Adams but his absence wasn’t solely to blame as their shot selection was poor all night. 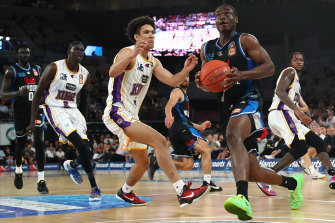 Melbourne came into the game with a 0-2 record and questions around their championship defence but those queries were gone within minutes while similar doubts around Agada faded away too as he shot 14 first-half points.

Agada finished with 21 points along with seven rebounds while United skipper Chris Goulding returned from a hamstring injury to score 13 points in 21 minutes while Jo Lual Acuil had 11 points and eight rebounds, much of that during the first half.

United posted an NBL record opening quarter margin of 34-5 while keeping the Kings to an abysmal 1-19 from the field in the first 10 minutes and that horror run set the tone for the night.

Goulding and Agada tested their range firing from several steps behind the line and both of their shots went in.

Kings coach Chase Buford using both his first half time-outs in an attempt to stop United who scored 26 points straight before Kings guard Biwali Bayles made a lay-up with 2:55 to go in quarter for their only basket.

United’s 34-5 first quarter was the biggest opening term margin in NBL history and things only improved marginally for the Kings in the second term as they found a few baskets and Melbourne’s defence became a little less intense.

But a time out from United coach Dean Vickerman helped his side reset and the Kings didn’t help themselves by leaving veteran power forward David Barlow open for two threes as he made both to spark another run as United took a 55-21 lead at half-time.

The tally of 21 points was the second lowest in team history as the King shot seven for 34 from the field and one of 17 from the three-point line, Next Stars centre Makur Maker showed some fight to have six points off the bench.

The second half was nothing more than a practice run as players were rotated and the energy shown by United forward David Okwera stood out as did the drive from Kings guard Biwali Bayles who fought manfully.

DJ Vasiljevic returned from a ruptured Achilles for the Kings while RJ Hunter passed a game-day fitness test but struggled to make his shots, like the rest of the Kings.

The Kings have less than 48 hours to recover as they host South East Melbourne Phoenix at Qudos Bank Arena on Saturday night.