Patty Mills equalled the NBA record for three-pointers in his debut game for the Brooklyn Nets as they dropped their season-opener against reigning champions Milwaukee on Wednesday (AEDT).

Mills shot a perfect seven from seven from the three-point line to finish with 21 points in a 127-104 loss in Milwaukee as the Bucks raised their championship banner, their first since 1971, and received their rings in an emotional pre-game ceremony.

The game was Mills’ first with the Nets after a decade with the San Antonio Spurs and it also tipped off the NBA’s 75th season.

The Nets continue to play without superstar guard Kyrie Irving, who won’t be a part of the team until he agrees to have a COVID-19 vaccine, and Mills helped settle the side when he came off the bench in the first quarter with the Bucks well in control.

He nailed five of his threes in the first half to have 15 points at the break before adding two more in the second half. But the Nets failed to find an answer for Bucks star Giannis Antetokounmpo, who had 32 points, 14 rebounds and seven assists in the comfortable win.

Nets coach Steve Nash praised Mills for his impact on the team after signing a two-year deal as a free agent this off-season.

“His shooting was exceptional but more just the energy, IQ and experience. 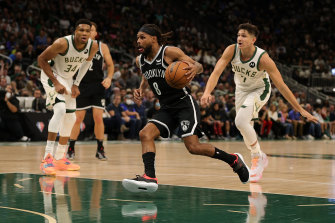 Patty Mills in action on debut for the Nets.Credit:Getty Images

The Nets still expect to be contending for a championship despite the ongoing drama with Irving and superstar forward Kevin Durant, who had 32 points and 11 rebounds, said the team knows it has a lot of work to do to be able to compete with settled teams like the Bucks.

“We just couldn’t get over the hump because they had more possessions than us.”

Durant said the team would need many more big-game performances from Mills this season.

“We’re going to need that from Patty,” Durant said.