Home » Basketball » Death threats, kids stalked: What it’s like to own the Sydney Kings

Death threats, kids stalked: What it’s like to own the Sydney Kings

Paul Smith is sweating bullets. They are shooting out of his shaven head and drenching his garish baby spew yellow shirt that features skulls, red flowers and gargoyles.

“It’s so ugly, it’s pretty – like me,” the Sydney Kings owner says. 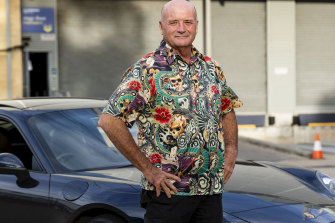 Smith is starting to leap out of his courtside seat with greater frequency as the Kings mount one of the greatest last-quarter comebacks in NBL play-off history. They were trailing by 16 points with six minutes to play, but are now starting to roll over the top of Melbourne United in game one of the semi-finals at Qudos Bank Arena.

The ball finds US import Jae’Sean Tate, who drains a three-point shot that edges the Kings closer. Just nine points down now …

And that’s about the moment when it all becomes too much for Paul Smith, bless him.

He gets up, storms off, stands in the tunnel in the corner of the arena, away from the lights and cameras and the Melbourne United supporter in a nearby box who earlier had pointed to him and barked, “F— you! Go Melbourne!”

Sitting next to Smith is former Boomers and Chicago Bulls centre Luc Longley, who Smith has hired this season as a consultant.

“Paul’s used more energy than half the players,” Longley says with a smile. 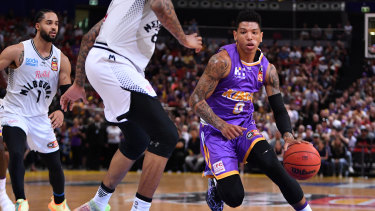 When Smith finally returns, with the Kings now within two points, he reaches into his pocket, pulls out a silver blister pack and washes down a small white pill with a beer.

“You don’t want to know,” he laughs, before tapping his head with his finger.

Things turn out peachy for Smith and the Kings on this night following a 24-2 run. A Didi Louzada three-pointer puts them ahead with 40 seconds left to play. Never in doubt.

In the dressing room afterwards, Smith explains why he had to temporarily extricate himself.

“I had to do a fart,” he says. “I’m joking … I just needed a moment. The medication is for my ADD. Ritalin. I had to settle down. I needed a breath. I was all over the shop. I’m a flawed individual!”

Most of us are but most of us don’t own a sporting franchise, nor have we become as visible as Smith has in just one campaign since lifting his 50 per cent stake in the Kings to full ownership this season.

Whether it’s staring down league owner Larry Kestelman in owners’ meetings, or challenging rival fans on social media to meet him face to face, or being sanctioned for slamming the Perth Wildcats for “corporatising” their singlet during the Indigenous Round, Smith has positioned himself as Australian basketball’s Mark Cuban, the outspoken owner of the Dallas Mavericks.

Asked if getting firmly up the nose of opposition fans has been strategic, Smith shoots back: “F— yeah. The Kings are the Violet Crumbles. They’re weak. They’re soft … If they hate us, then lower the George Bush banner on the USS Abraham Lincoln that says, ‘Mission Accomplished’. I’ll do it. I’ll take the ball up. I’ll poke the bear. I don’t expect the players to do it.”

More bullets will be sweated on Thursday night when the Kings host Melbourne in the game-three decider. The ascendancy is with the visitors following their 45-point humiliation of Sydney on Monday night. 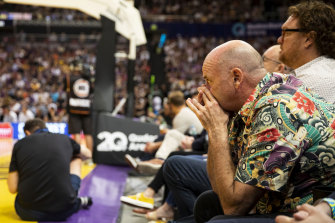 “Luckily, I’ve been involved in many 45-point losses before,” Kings coach Will Weaver told the owner after the game-two loss.

The Kings’ precarious position seemed an eternity away when Smith picked me up on Saturday afternoon hours before the opening match of the series. He was driving his famous midnight blue Porsche 911 Carrera, which he bought after selling his sports consulting firm Repucom for $260 million and loans to his players.

The first person he handed the keys to was guard Shaun Bruce after he absorbed a heavy charge during a match against Brisbane.

“Brucey, that’s awesome, mate!” Smith bellowed from the stands. “You can have the car for two weeks!”

“I heard that,” Bruce said at the next time out.

For the next two weeks, Bruce drove a car worth “half a Sydney apartment” while Smith putted around in Bruce’s Ford Taurus.

Smith then gave the Porsche to Tate when his girlfriend visited from the US. Then point-guard Casper Ware assumed ownership and didn’t hand it back for five weeks.

“It takes diesel, right?” Ware joked in a late-night phone call to the team boss.

Says Smith: “Other fans think we’re cheating the salary caps, that we’re giving them luxury vehicles, which is ludicrous”.

When we arrive at the arena, though, the only thing anyone wants to talk about is his shirt. Gate attendant: “Nice shirt”. Doorman: “That’s different”. Courtside announcer Rodney O: “WHAT’S WITH THE SHIRT?” Kestelman: “Very understated for Paul”.

“It’s not for show,” Smith insists. “This shirt is me. I am comfortable with myself. This club, in this town, needed to inject a personality into it to get things going and to get people up and about, whether they’re hating us or loving us. At least they are talking about us.”

Make no mistake: there's more to Smith than a sideshow. Having missed out to WIN Television on 50 per cent ownership of NRL powerhouse St George Illawarra, he assumed full ownership of the Kings instead in April 2019.

When he did, marquee player Andrew Bogut told him the team needed to be more professional. So Smith convinced the innovative Weaver to leave the Brooklyn Nets system and New York to turn things around.

The end result is a championship-worthy team with a growing supporter base. Membership is up 57 per cent. Instead of lifting prices next season, Smith is lowering them.

“Sydney is a wait-and-see market,” Smith says. “And they’re seeing it now.”

Sometimes, though, Smith’s wackiness has become a distraction. Last month, he was fined $5000 and given a suspended one-game ban after dispatching a tweet about the Wildcats’ jersey in Indigenous Round.

“Using the guise of indiginous [sic] cultural engagement and reconciliation to promote 9 championships, 33 finals appearances and a heavy travel schedule on a singlet,” he posted.

“I don’t regret it,” he says now. “I’ll stand by what I did. I regret that some people used it in a way that it wasn’t intended. But I’ll say it again if I have to. I talked to the artist, he was grateful for the debate, and he understood my point of view. Matters relating to Indigenous affairs and reconciliation can’t be corporatised or cheapened.

“You can’t swim in the cesspool of social media and not think you won’t come out of it without a few turds in your undies. But the thing is, don’t make death threats, which I got, and do not chase my children. My kids got abused and cyberstalked on social media. That crossed a line.”

Smith has put the gun back in the holster for this play-off series after Longley instructed him to stay off social media — but he’s certain to come out thumbs a’blazing should they win game three and reach the grand final.

"You have to feel it," he says. "And if you don’t, you’re not living it. Any owner who isn’t prepared to stand in front of his fans and say, ‘I’m dying here and loving it’, shouldn’t be doing it."