Adelaide 36ers co-captain Kevin White has made allegations of serious misconduct against  former coach Joey Wright, lashing out in a series of tweets on Friday.

White, a respected NBL veteran, was incensed that Wright, who coached his 500th NBL game last round, criticised players he felt didn't play for him this season following his "mutual departure" from Adelaide this week. 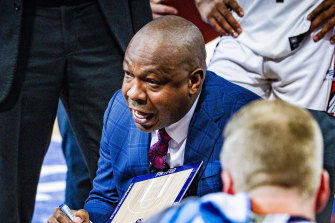 The 36ers said in a statement that they were investigating the claims although White said in his tweets that he had been promised action for weeks and nothing had happened.

The NBL said it was working with the Australian Basketball Players Association to get more information on the allegations.

Wright had said that imports Eric Griffin, Jerome Randle and Ramone Moore, along with young big man Harry Froling, were not committed to playing for him and they had no relationship.

White then unleashed a series of tweets on Friday exposing the manner in which Wright spoke to his side as they dropped out of finals contention for the second straight season. 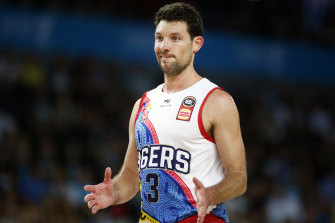 Kevin White has lashed out at his former coach Joey Wright.Credit:Getty Images

Wright responded with: "F— all of them. Hopefully it gets low enough for them to hang themselves. F—ing dicks. He added: "Maybe a bit to [sic] harsh" along with a smiley face.

Wright told Channel Seven in Adelaide on Thursday that his imports and Froling hadn't performed this season.

"Our import contingent didn't get it this year, those three let us down and we would have liked a little more from Harry as well," Wright said.

"The rest of the guys were very committed and worked their butts off. They are great human beings and great people."

Wright told SEN on Friday that he made tough comments behind closed doors and the coaches' chat was meant to be a private forum to vent, and the comments had been taken out of context.

"I say in there 'too harsh' which is a joke we use after we say something we know is wrong to say and it was absolutely wrong to say but I was only joking," Wright told SEN.

"For them to take it out of context shows the dysfunction I was dealing with this year."

Wright added if the players' group had their messages made public it would "defame" anyone.

"Players have their chat messages that if published it would just look disastrous – it would defame everybody," Wright told SEN.

"And we have a chat group with players and coaches both in it. I could put out messages that would make every single player on that team look like an idiot, and that's just not what you do.

"Because they are going there to vent, to crack jokes. We put a disclaimer in there that this is not for public use, this only for private and it’s never to be published."

Wright has long been one of the NBL's most successful coaches winning three coach-of-the-year awards and a championship with Brisbane in 2007.

During his seven-year stint with the Sixers he regularly had the side in the finals and helped Mitch Creek and Terrance Ferguson make the NBA.

But Wright also has a fiery temper and often battled with the league, including putting himself on a media ban during the team's run to the 2017-2018 NBL grand final where he answered all questions the same way after being fined by the league late in the season.

White’s tweets also went inside team meetings where he objected to Wright's comments which he felt demoralised the group as they fell down the ladder to finish seventh.

"WOULD YOU PLAY FOR THIS GUY???" White tweeted on Friday in his last post.

"Would you let your kids play for this guy?

"For the sake of mine and my team mates mental health this needs to be exposed because it is not and should not be acceptable!"

Wright is believed to be seeking coaching positions in Asia or the US but he told media he was planning to stay in Australia in the meantime, hoping to secure Australian citizenship in late September as he has been playing or coaching in the NBL since 1994.