Home » Athletics » Jenneke smiling, bouncing and running faster than ever to make final

Jenneke smiling, bouncing and running faster than ever to make final

Michelle Jenneke was never likely to win her Commonwealth Games heat after she was drawn next to the new 100m hurdles world champion and world record holder.

But the Australian ran faster than she has in her life, with a helpful wind behind her, to finish second behind Nigeria’s Tobi Amusan. With Amusan in the field, everyone is running for second, but for a period Jenneke led the world champion. 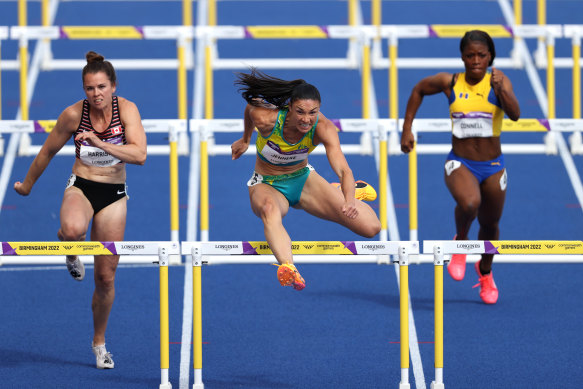 She crossed the line in her fastest time, albeit with an illegal wind at her back which meant it wasn’t technically a personal best, but in all conditions 12.63 seconds is as quick as she has ever run. Amusan ran 12.40s.

“I don’t feel like I really ran through the end all that well, so hopefully I have got a little bit more to give in the final in a couple of days,” Jenneke said.

“She (Amusan) is incredible but I am one of those people, I don’t want an easy heat, I want to be racing the best. I think that is how I get the best out of myself which I think I proved today by running that time.

“I am really looking forward to racing her again in the final.” 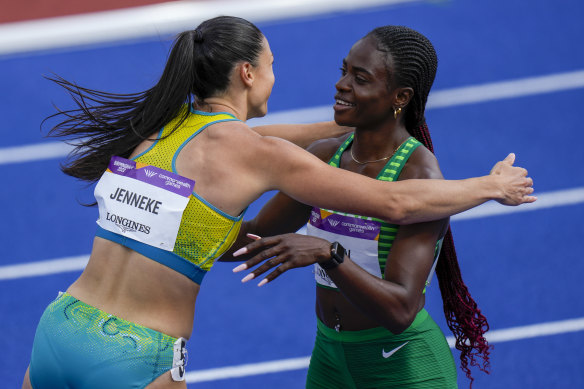 Tobi Amusan and Michelle Jenneke share an embrace after both qualifying for the final.Credit:AP

Whether Jenneke’s form translates into a medal is not entirely down to her.

“I don’t know if I will be quite good enough for a medal, but hopefully I can run a personal best and see where that puts me.”

Jenneke, who dances and bounces cheerily in the starting line, is unperturbed by the field’s credentials and the stony visages of the stars around her.

“I am not someone who, as a young athlete at my first champs, that got really intimidated by anyone. For me, when I go out there I am just trying to put my best foot forward and they are trying to do the same thing, and if they beat me they beat me.” 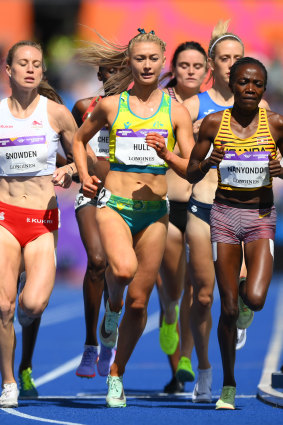 Jess Hull is back on track in Birmingham after suffering from COVID.Credit:Getty

Australia’s Celeste Mucci also qualified for the final after running a 12.96s personal best in her heat.

Later Jess Hull, who was out of action for a week after running at last month’s world championships with COVID, qualified for the 1500m final.

“I felt a little rundown going into the final and, as the hours went by towards the final, it was like ‘I’m getting really sick’,” she said.

“I spent five days flat on my back and I think running the final with symptoms was what flattened me, not necessarily the virus itself.”

Since then, she has got stronger in training.

“My legs were totally fine, it’s just the breathing that was a bit funky. Once I could get through that I thought, ‘I’m getting better every day, and so long as I can put that out of mind and just race – which is what I did in the final at worlds, I just focused on breathing and not how I actually felt – then I’m going to be OK’.”

She ran well to finish in the top five of her heat in 4.16 minutes,13 seconds to advance to the final. Linden Hall also qualified after running 4:14.08.

Abbey Caldwell, who was surprisingly not picked for the world championships despite winning the national title and having a qualifying time, said she was hungrier to do well in Birmingham after missing out. She qualified for the final by running 4:13:59 in her heat.

“There are certainly parts of me (that feel like she has a point to prove). That’s sport. There are always going to be sides to it where you have highs and lows, and you have to just ride them as they are,” she said.

“As hard as it was, it made me a bit more hungry and made me eager to really want to get the best out of myself now … I said I wanted to come into this championship as a competitor rather than just coming in as my first major, so I am going to see how it plays out really.”

Get all the latest news from the Birmingham Commonwealth Games here. We’ll be live blogging the action from 4pm-10am daily.